How to Paint a Chair 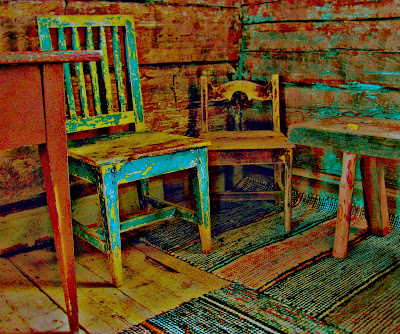 She rummaged around her paint shelf for the stain she'd used so inexpertly eight years ago on the garden furniture. Was it still there? She'd recently purged the basement of truckloads of detritus accumulated over the years. Much of it, including many old cans of paint, was recycled at various points around the city. Could she, in a moment of zeal, have tossed that stain too?

She'd obviously had a moment of clarity when assessing that particular can because there it was, nearly full but badly separated after years of stagnation. She wondered if stain could go bad like mayonnaise but since the furniture was old anyway there was little risk. All it probably needed was a good shake and a stir.

It was a nice day with little chance of rain, perfect for the task if she could manage to concentrate long enough to accomplish anything. He had been particularly restless lately so there were no guarantees but since it was a long holiday weekend with no respite in sight, she had to find something to do to stay sane. She ushered him outside and settled him into his reclining deck chair, hoping he'd nod off in the sunshine.

The chairs were rough old things acquired for free from neighbours. They had been badly weathered but she had smoothed out the wood and applied a stain to hide the age spots. It was time for a face lift again, a good focus for a quiet, lonely Sunday afternoon.

He remained still for the duration of the sanding but started to stir as she pried open the paint can. She tried to ignore the restless rustling of medication taking effect. Bent over the chair, her back to him, she could envision the facial contortions that were beginning and the glimmer of madness that always accompanies the medications reaching full effect - a most dangerous combination of renewed physical agility and heightened dementia. That surge of energy must be a heady feeling for him after the nearly paralytic bradykinesia of the off times. A sense of superhuman strength, almost. She could see it in his eyes: I can do anything, they said, and she was always there to thwart him or "badger" him. That was the word he'd used the other day as she ran after him when he'd escaped to the road. She had tried to help him walk back when he could only manage half a step at a time before falling on the hard pavement. On that occasion, after the rebuke, she had left him alone and run back to fetch the car but, with her gone, he had miraculously picked himself up and jogged the very short distance home. It was getting difficult to know when to intervene with a man who could swing wildly from belligerent independence to panicky neediness in a matter of seconds.

He got up from the chair and she brandished her paint brush somewhat wildly, knowing this was now going to be an interrupted job. She considered abandoning the project to follow him but she was still stinging slightly from the accusation of over-attentiveness. He shuffled down the ramp in his slippers. Glancing up, she saw him move down the driveway. She wanted to let him just go, so, with her back still turned, she held her breath, only releasing it when his movement shuddered then pitched him to his knees onto the gravel. Ouch, she winced, but he picked himself up and turned back.

Still painting, now frantically, she listened for his steps back up the ramp but he detoured to the back of the house. Well, at least the grass is a little easier on those poor knees, she thought, but still didn't leave her task. A few more stabs with the paint brush, then she dashed around the back to check on him. Oh %$#&;! Where the hell is he? He couldn't have disappeared that fast. She bolted into the house, yelling his name but there was silence. Back outside she now noticed the upper door to the basement was slightly ajar and there he was trying to pick the locked door at the bottom of the stairs with a small stone.

Determined to complete at least one chair now that she'd started, she left him to his break-in project and raced back around to the front to continue her task for a few more seconds before the next check-in. This time he had made his way back up the six stairs and was now sprawled out on the paving stones picking at the sand between the bricks. She opened her mouth to protest the little piles of sand he was beginning to create but caught her tongue. Another dash back to the painting project.

Next she heard the shed door open. Obviously the brick-picking project had been abandoned but she made a mental note to sweep up any scattered sand later. She once again put down the paint brush to join him in the shed where he had parked himself on the lawn tractor and was fiddling with the knobs and levers. She congratulated herself for hiding the key two summers ago after he had tried to flee on the machine one day, scattering small stones like gunshot towards the house and fragile windows. She believed there was little harm he could cause just fiddling so she bolted back to her paint.

On second check to the shed, he had now fixated on her bicycle. His was hung up from the rafters but hers had been jammed next to the tractor. She implored him to not take it outside but she knew it was a waste of breath because there was that look in the eyes. Oh well, maybe she could get a few more licks of paint on that chair before he managed to wrestle the wedged-in bike outside. Surely that would prove too difficult for him now. He'd probably fall and really hurt himself this time, she thought guiltily but not enough to intervene.

The next noise she heard was the crunch of gravel underneath the wheels of her bike. As she turned her head to look she saw him straddling the bicycle. GREAT, she muttered bitterly, then decided something very irresponsible: If he wants to ride her bike then she'd jolly well make it easier for him. What kind of lunacy had overtaken her, she didn't know, but she was now feeling about as rebellious as he seemed to be. Knowing her tires were flattened from a winter's inactivity and not wanting them to be damaged, she cheerfully offered to fill them with air for him. She knew that to thwart him would now create a real dust-up, a scene that hadn't been acted out in such a long time, she never imagined he'd rise to it ever again. With a moment of scientific curiosity overcoming her protective instinct, she thought she'd just see how far this might go. She helpfully suggested he stick to cycling around on the grass, but the look he gave her suggested he had already made up his mind.

Another dash up to her paint can, another few licks of paint, then a glance over her shoulder again. He was gone. Of course he was. Why did she even think there was a chance he wouldn't go?

More vulgar expletives under her breath. She ran inside to grab the car keys, thinking he might have gone towards the highway, God forbid, but then she heard the distant bark of a small dog down the end of her road. She'd drive down there first because the thought of him wobbling out onto the highway was too unbearable. Besides he could have gone in one of three different directions by now. She knew how fast he could travel if he really put his mind to it. And - relief washing away her petulance -   there he was, nearly at the end of their small road, stopped as normally and casually as anyone out for an afternoon bike ride who had run into a neighbour. Well, not literally run into her, though that was a distinct possibility for him. No, he was chatting to a young friend out walking her yappy dog and looking as though she wanted to flee as far away as she could get from this crazy man on a bicycle.

It took a great deal of effort to not shout at him to go home but instead she rolled down her window and chatted amiably to the young friend, congratulating her on her recent university graduation. Then as the young woman made her excuses and nearly ran back to her house, he mounted his bicycle, ignored his wife and cycled off back toward their home. She rode on ahead and turned back into the driveway, not even certain he would follow her but she didn't look back to check on him. She simply returned to her project, like a moth to the flame. He rolled up the driveway a few seconds later, parked the bicycle half in the shed, then shuffled back up the stairs to join her on the deck. He nearly fell into his chair, collapsing from the exertion and the waning of the medications. She barely spoke or acknowledged him, pretending it was the most normal thing in the world for him to set off on a little ride all by himself. She calmly painted the last few strokes, then sighed mightily to see the job completed.

Her eyes scanned the deck, taking in the rest of the shabby furniture. Only six more pieces to paint.