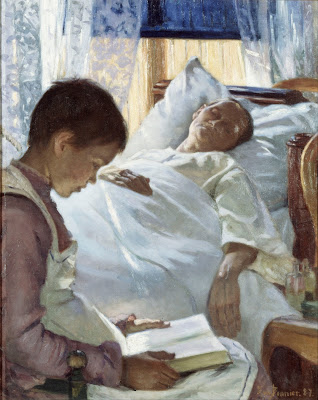 The nurse pumped up the band around Michael's arm. "This usually makes him wince," she commented with a furrow in her brow. But Michael lay inert on the bed, eyes closed, his breathing a disturbing rattle. It was 1:30 in the afternoon and he hadn't budged since bedtime the night before.

I had made my first call to the emergency care number on Sunday. It had been a crazy week of heightened mania, leaving me to wonder what changes were happening in my husband's brain and ready to bolt myself. I had consulted with the neurologist on Friday, desperately trying to find some solution to the psychosis. We agreed to reduce the amount of Comtan at the end of the day when the mania was taking full flight (It is common, in advanced cases, to reduce Parkinson's medications to control psychosis, these medications being the primary cause of this disorder). In fact, on Friday evening, the first day of the reduction, Michael was clearer-headed than he has been in a very long time. He gave me the gift of a very brief but real conversation on our wedding anniversary. It might be his last.

He had awoken at three Sunday morning but I had managed to keep him in bed until six even though he was obviously running on psychotic energy and trying to escape his bed. I finally admitted defeat and coldly ushered him into the shower and seated him at the table to eat, all well before his first dose of medication for the day. But he slumped before completing his meal and had to retreat to the couch for his morning nap. I noticed that his mobility had suddenly worsened and his confusion increased but, in themselves, not extraordinary occurrences. Were the positive effects of the Comtan reduction already over?

It wasn't until I followed him into the bathroom after lunch to help him use the facilities that I noticed the small, violent streak of blood in his diaper, the defining clue to the previous week's mania: a urinary tract infection. I now knew how to focus my questions: Does it hurt to pee? Do you have any pain in your pelvis or back? How long have you been suffering? His responses were surprisingly clear. He had had pain on urination for about two days (could be more or less given his lack of perspective concerning time) and discomfort in his pelvis.

I made my call. The nurse I spoke to passed along my message to the roaming duty nurse that day. She contacted me no more than ten minutes later and then consulted a doctor, who, based on her knowledge of my own vast experience with Michael's care, automatically issued a prescription to our pharmacy for the same drug we've used before for this problem. With the assistance of my visiting son and daughter-in-law, I had a prescription for Ciprofloxacin in my hands within the hour, an astonishing achievement in any medical system, if you ask me. With great difficulty I collected a urine sample from Michael and rushed it up to the hospital for analysis. In the meantime, the hope is that the Ciprofloxacin will get to work until the analysis is complete, allowing a fine-tuning of the medications later if necessary.

At this point Michael's condition plummeted rapidly. He went to bed and has essentially stayed there since Sunday, in and out of consciousness with a fever that spikes alarmingly in the evening. Except for the small amounts of yogurt or apple sauce needed to administer his pulverized pills, he is eating nothing and drinking very little, his cheeks hollowing rapidly. Yesterday was the most disturbing with the laboured breathing, prompting the visiting nurse to contact the doctor again. Michael has now had three full days of the antibiotic so I am hoping today, Wednesday, will be the turning point for him. He was certainly more alert yesterday, awake and up for an hour in the afternoon. I am insisting he stay in the wheelchair when he is up now because he is so weak from fever and lack of food he can barely walk. He seems content to stay in bed and is mercifully very calm. Last week's mania has vanished.

On Monday, realizing that this was different than what we have experienced in the past, I felt a panic grip my heart. This is it, I thought, and picked up the phone to weep with one of my children. I have tried to prepare myself for that final separation but we never can fully. The thought of losing him felt tragic to my broken heart.

We are all poised but, as we keep reminding ourselves, this is Michael. He has astounded us before with his resilience. One of my children brashly announced she refuses to accept it until it happens. She is not being cold; she is simply protecting herself from another round of anguish. And yet when I told her that, for the first time through her daddy's long, bumpy journey with this disease, I had whispered to him tenderly that he can go if he is ready, she was tearfully silent at the other end of the phone.