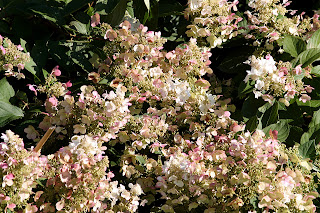 Three years ago it became clear that we would need to outfit our home with an exterior ramp if we were to stay in this house. Michael's mobility was becoming more impaired and, though he was still ambulatory, it seemed that the time was drawing near when that would no longer be the case. The government health services had already supplied us with a wheelchair, but apart from occasional use it has primarily remained in one spot at the dining room table. It allows easy positioning at the table which is otherwise difficult for him.

To date, the wheelchair still remains largely unused, but it has proven useful on a few occasions. We have used it outside occasionally when Michael has found himself stuck and immobile, needing to be rescued in the chair, but it is difficult to push the vehicle over our gravel roads. It is a testimony to his supreme athleticism and agility that he can usually still negotiate stairs extremely well, even when he cannot walk. Another odd Parkinson's paradox. Michael only goes outside to walk around on the rare days when he is able, and our very few outings together are always well-planned to coincide with his optimum mobility later in the day.

The building of the ramp was incorporated into a complete overhaul of our front porch which runs the full length of our log home. In the process of planning this project I decided it would be nice to add a large deck to the front of the house with the ramp sloping nicely toward the driveway and onto a brick walkway. The finished product is very attractive, especially with the rock garden I incorporated into the design and on which I have worked for three years. I am very happy with the results and now have an easy access for Michael on the so far rare occasions he needs it. He is mostly housebound now but at least can easily get outside onto the large deck to soak up some sun when he can. The ramp has been used a few times to transport him out on a stretcher into an ambulance but mostly the dogs use it to race up to the deck from which they launch themselves down the opposite staircase if there happens to be a passerby they need to yell at.

We had only one regret concerning this ambitious project. A well-established, spectacular hydrangea bush would have to be removed to accommodate the new structure.  Every summer this large shrub would produce hundreds of large, elongated white blossoms that, as the summer ebbed away, would turn a brilliant pink. If left on the bush, these flowers would dry out and turn an attractive brown but if you clipped them off while still pink, they would stay that colour for years in their dried state. Friends from all around would remove armloads for their homes.  One year a friend even arrived with a large suitcase to carry dozens off to her mother in Manitoba. Maybe she still has them.

We pondered chopping down this beloved tree that we strung with lights every winter to brighten up the dark nights. But it was heartbreaking to contemplate. We consulted with a tree expert who told us the tree needed more light even though, to me, it seemed to be thriving right where it was. He thought a transplant might be possible. Really? A tree that big?

Michael's soccer team buddies, of which the tree expert was a member, had wanted to help us out now that Michael had had to give up the sport. They seemed willing to take on this task. One Saturday morning they arrived ready to start work. I had promised pizza and refreshments.  A new location in the back yard was chosen, a spot that saw sunshine all day long.

As this was long before I needed to be Michael's constant nurse, I toddled across the road to the Nearly New Shop for our monthly sale, leaving these competent men to their task. When I returned many hours later I found the tree relocated but not without mishap. It turned out to be so huge and so heavy, that one fellow's large SUV was called into action, but, not being even big enough for the task, some damage was done.  The men were soaked in sweat and exhausted, proclaiming the tree was far bigger than they had expected. It was a Herculean effort by all. Michael supervised.

I am sorry to report that this once magnificent tree has done poorly in its new location. I inspect it daily from my kitchen window and mourn the loss of those vivid blossoms because, since the move, we've seen only a few puny flowers, nothing like its glory days.  I have since learned that this tree, contrary to the expert's advice, actually needs shade to thrive, making its old location a perfect one. Every spring since the move, there are more bare branches that need to be removed. It is a thin, nearly leafless ghost of its former self.

A dear friend gave me a new hydrangea bush last year for my birthday.  It seems vibrant and strong and sits proudly in a spot very near where the old one reigned with such majesty. A rebirth. Time will tell whether it will be as beautiful and stunning as its predecessor.

As for the other, it stands as a stark symbol of that day of unified effort and a valiant struggle to survive.  It is also a reminder of the wasting nature of this disease, mirroring in real time Michael's own more rapid decline over the past three years since I attempted our doomed visit to the west coast, the dramatic beginning of Michael's downward spiral. Every spring sees him, like the tree, with far less vibrancy than the year before.

As the tree weakens I am left wondering: Will this be its last summer or will the agony of its decline span many more seasons. And what is the most merciful thing to do? Should I cut it down before its inevitable death, or should I simply let it fade away slowly and naturally?

*Hydrangea paniculata
Posted by Unknown at 5:08 AM