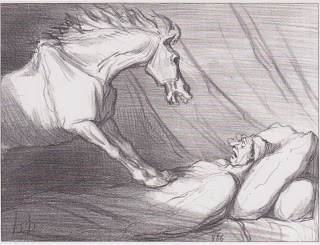 It was much like a nightmare. Bad things are happening, you're not quite sure what, and you can do nothing about it. You feel like running away but your legs won't move because you are pinned down. Even if they could, you know you'll just be spinning your wheels, going nowhere.

Monday evening was uneventful.  Two phone conversations with my kids were the highlight. I felt a vague cramping below my right shoulder blade. I can usually work such things out by stretching. I got Michael off to bed without drama with the same nagging sensation in my back but I was unconcerned. I climbed the stairs to bed.

I couldn't relax or get comfortable. I tossed around for a while but the discomfort was now in my upper right abdomen. Nothing serious. Could just be gas, though I hadn't eaten anything for several hours - I never do in the evening.  I tried my usual remedies which, by midnight, seemed to relieve things somewhat, allowing me finally to fall asleep.

One o'clock. Pain wakes me. Now it's severe, though more a squeezing sensation than sharp pain. My belly is distended and I can pinpoint the exact site of the pain, in fact it's tender to the touch: right side, just below my ribcage. No ignoring this.

This is something other than indigestion.  I've never had anything like this before - or maybe I have, way back in my early twenties, a similar attack, lasting several days, that I may have mistaken for stomach flu. I was very ill but I sought no medical help. I lived with a first year medical student at the time and he was completely unconcerned. I'm not sure why I trusted his only slightly educated judgement. This time I wanted to consult with someone more reliable. I knew this was serious but it was now middle of the night and I had a very sick, but sleeping - thank God - husband in the house.  I could not leave him alone. What do I do?

I called the Quebec government telephone service for medical advice. I spoke to a very calm, kind nurse who got my phone number right away (in case we are cut off) then asked me to describe my symptoms. I told her I thought I might be having an unprecedented gallbladder attack but I had no fever, I was calm (sort of), and otherwise okay except for mild nausea. She asked me to rate the pain with ten being extreme.

"If I put labour pains as ten," I told her, "then this is about an eight."

Her advice: Go to the hospital.

"Impossible," I declared and described my situation.

"Take him with you," she advised.

"Impossible," I reasserted and wondered why I had called. I suppose I had just wanted contact with another human being in the dark, lonely night.

I ran through the list of nearby friends I could call to come over at 2 a.m. But did I really want to go to the hospital? I'd have to take an ambulance, since there was no way I could drive in that condition, and then probably wait a very long time to be seen. Through the fog of pain and sleeplessness and worry, I did my best to consult a few resources on the subject. Could I take a heavy painkiller safely with this possible ailment? Nothing seemed to indicate that Tylenol 3 would be harmful so I popped two pills, left over from my son's wisdom teeth extraction, and hoped for the best. I unlocked my front door in case, unused to any medication let alone strong ones, I didn't come to in the morning;  I wanted my caregiver, due to arrive at 9:30, to be able to get in.

There was no danger of sleep. The pain subsided by 4:30 but the drug seemed to make me more wakeful and uneasy. Damn. Oh well, I'd enjoy the respite from pain as long as it lasted. I resolved that if the pain recurred in the morning, I'd head off to the hospital when I had my caregiver here. Her presence wouldn't alarm Michael. If no pain returned, I'd at least make a doctor's appointment.

The pain has mercifully stayed away - so far - though the doctor said it could recur at any time or never come back.  He agrees that it was probably gallbladder-related and has ordered an ultrasound to see if I have stones. He advises surgery if I do.

I called my naturopath in the morning and immediately started on an alternative treatment consisting of a homeopathic preparation and small, daily doses of apple cider vinegar.  I have also educated myself on the subject. I don't know if any of this will work but I must give it a try before agreeing to submit to the slice and dice option which could leave me incapable of looking after Michael for a long period of time. But then so could not submitting to surgery. My children are alerted and are poised to return home, if they can, to help out if necessary. A lot of ifs. I can deal with the uncertainty of Michael's ill health but not of my own. I am the main support in this house of cards. I depend upon myself.

I've been in a mild fog all week recuperating from a night of lost sleep and the troubling implications this predicament presents. I am very careful with my low fat diet; my weight is good; I am fit and active; I don't smoke or drink, my biggest physical vice being two cups of tea a day (I won't even get started on my spiritual vices but I'm hoping they are irrelevant in this situation); my recent blood tests all indicate healthy levels of cholesterol, the main culprit in this problem. In other words, I work very hard at staying healthy and fit to be able to do this onerous job.

To say I was completely blindsided by this would be an understatement. I know this is not life-threatening - or at least there is very low risk of that, if I am careful - but it will most certainly create enormous problems if it returns.