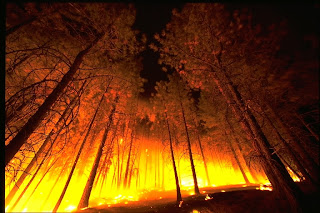 These are the visions my husband must cope with when in the throes of a paranoid hallucinatory attack. They are often sparked by stress, such as a visit to the hospital where the entire staff becomes the heavily armed enemy and Michael the victim. Or it could be an underlying infection or illness that tips him into this horrific world of fire and brimstone. Most recently it was simply the arrival home of our children for Anna's wedding. Not that these fine young people are to be feared in any way. It is simply that they represent a bursting of Michael's small, protected bubble and fling him into a state of uncontrolled confusion about what is going on, what is expected of him and, perhaps most significantly, whether I will be there and undistracted at all times to maintain and manage his equilibrium.

This most recent descent into hell marked a new development in his hallucinatory life. It was certainly the most severe for such a small upheaval. In the past the triggers have been dramatic and foreseeable; a cold, a heart attack, a prolonged dental procedure, a urinary tract infection, hospitalization. This was the first time a visit from his beloved children was the flashpoint. In the past he has reacted to these visits with anxiety and a panoply of strange physical symptoms but never hallucinations.

It happened twice in the space of several days: the first time with Anna's arrival which I then treated successfully with the Ativan (see "Ativan to the Rescue"); the second on her return from her honeymoon with her new husband a few days after the wedding. Michael's anxiety manifested immediately so I leapt upon the Ativan and treated him without delay even though I had only weaned him off the drug a couple of days earlier. He was calmed immediately so I congratulated myself on my quick action. I was premature, unfortunately. That night was one of his worst ever for wakefulness and delirium, though curiously not anxiety. I suppose the Ativan at least took care of that.

He was unable to articulate his visions through the night, though I guessed they were probably fire-related.  We were up ALL night. The next morning, bleary- and teary-eyed, I asked him again and all he could say was, "Forest fires". I'd be vigilant all night too if I thought we might be consumed by flames at any moment. It's nice to know he's got our backs...

Hallucinations are not necessarily a feature of Parkinson's disease, though it seems that the more advanced the disease, the more likely they are, especially if the patient has suffered cognitive deterioration. It is also a possible side effect of many of the drugs Michael takes. Anti-parkinsonian medications such as Carbidopa-levodopa (aka Sinemet) and Comtan, anti-psychotics such as Clozapine, and benzodiazepines such as Clonazepam and even Ataivan itself, all list visual hallucinations as a possible side effect. Michael takes all these drugs. He used to take many more but most were withdrawn a few years ago in an attempt to relieve the increasing cognitive dysfunction and psychotic behaviour - with no success, I might add.

In combination these drugs must make a fiery, brain-altering mix, though I doubt much research has been done on these late-stage pharmaceutical combos. It is always a doctor's and caregiver's desperate  effort to balance the multitude of nasty and ever-increasing symptoms of this disease. At some point, though, the many drug side effects may outweigh the disease symptoms, but to remove these medications completely, even gradually, could spell death to the patient or at the very least a rapid escalation of all the symptoms, including hallucinations. It is also very difficult to determine which is which.

I have hallucinated only once while indulging in a mild recreational drug at age twenty. Fire filled my bedroom but I was sufficiently lucid to be aware that it was just a hallucination and would soon go away. I was untroubled by the vision but I never took that drug again. To be in a condition where I could not differentiate between reality and terrifying hallucination would be hell on earth. I cannot imagine the terror Michael must experience. I wish I could help somehow but all I can do is tell him what he is seeing is not real. The visions never disappear with that assertion, but somehow my presence alleviates the pain more than anything else. We'll be in big trouble when I no longer have that calming influence.

Would God actually let him reach that point? Let's hope that modern medicine, if not God, can come up with a solution.