A Night Out With Meryl 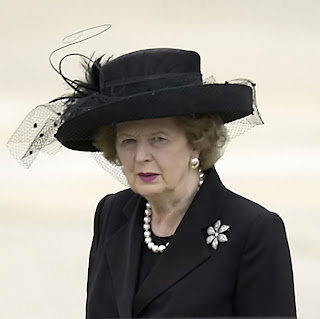 And Shirley and Carol and Angela, all equally strong, fine women. There would have been more of us but the region was hit by a small snow storm that threatened to escalate to a road-blocking extravaganza, making a few of our company worried enough about the driving conditions to cancel. But it was my rare night out and nothing short of a serious tempest was going to stop me. I offered to do the driving in to town to see "The Iron Lady"; I am so glad we were not deterred by the weather.

Meryl Streep, as most of you already know, wrapped herself up in the role of Margaret Thatcher so completely that I forgot she was Meryl and not Maggie. Told from the perspective of the here and now with an elderly Mrs Thatcher in the advanced stages of dementia and flashing back through her incredible history, we get a glimpse of the strength of this woman's formidable character, for which she was roundly hated by many, and of the unbearable sadness of a brilliant life reduced to isolation and the hallucinations that can accompany dementia. That artistic device is employed to bring back her husband Dennis (Jim Broadbent) who, you believe at first, is still alive and well and enjoying a boiled egg with his wife. Through the movie she struggles with his persistent presence, realizing occasionally that he is just a figment of her addled brain, and then she tries to banish him by turning on every electrical noisemaker in her home, desperately believing that if she cannot hear him, she will not be able to see him.

Whatever anyone might feel about the real Maggie Thatcher, nobody, I wager, will walk out of the movie house untouched by the character's sadness and grief, especially if you have any experience at all with advanced dementia.  Her husband's presence, albeit ghostly, gives her enormous comfort in her now circumscribed life. I was reminded of my mother who, in her last days on this earth, would be nodding off in her wheelchair, oblivious to her present company, then would chuckle happily and say, "Oh Jack!" in an admonishing tone, as if scolding my dad for some little joke he had told her, just as she used to when he was alive. It gave me great comfort to imagine Dad was there with her, teasing and cajoling her through her difficult last days.

Living in the past is not only a clever story-telling device but also a ruse played by the mind of a healthy soul to cope with a difficult present. I know Michael sometimes is thrown back into the past and can get locked into it, scrambling his perception of the present, but I too employ the device to get me through a troubled day.  To remind myself of the man that once was allows all the love and admiration I felt for him to flood back as I change the diaper on the man with a now wasted mind. More and more often I find myself  reliving past happy occasions. It is an odd feature of our memory how we can delete much of the not-so-perfect events of our lives together while idealizing the good. Even if it is not an altogether accurate history, I'd rather remember only the good.

We heard yesterday that my aunt had what is believed to be a massive stroke, though that has yet to be confirmed by the staff at the hospital in England where she is being treated. She is my last remaining blood relative of that generation, a fiercely independent woman who has had to live alone nearly thirty years after losing her husband far too early to a heart attack. I just spoke to her last week and listened to entertaining stories of her recent travels. Still bright and articulate at 87, she lived in her own home until yesterday morning when she was found unconscious by her cleaning lady. We have yet to learn what her prognosis is; childless, she has no other close family besides my brother and me so I worry about her loneliness. She was on my mind throughout the film last night, wishing I could share it with her and hear her perspective on the fierce and unforgettable Maggie Thatcher. But I was also fervently hoping that her own dear Alan is at her side right now, teasing and making light of her current condition, just as her brother, my father, seemed to do for my mother.
Posted by Unknown at 7:42 AM