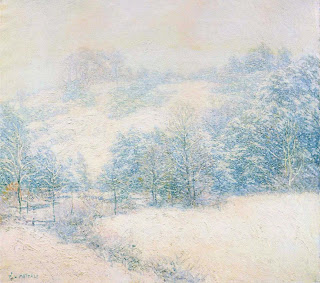 Out my kitchen window a lazy brown leaf floated by, left behind by its cohorts, lost in the wrong season. It was a slow motion flight from the tree with occasional happy little flutters when caught on a small updraft. Like a sun-sleepy butterfly, it drifted casually across the entire expanse of the snow-covered back yard until it finally came to rest in a nearby copse, settling with the company it sought.

I heard sad news yesterday that threw me back several decades. A woman who influenced my life greatly had died, belated news of this event finally reaching me. Rosalind W. Addison would have been 88 this year. A long, productive life had come to an end. She had been teacher, vice principal and headmistress at my all-girls' high school in Vancouver for most of her career, retiring long after I left. She was a formidable character, greatly feared, loved and respected; a woman of great fairness whom I came to appreciate the further away I got from that whole mildly traumatic time of my life. An old fashioned feminist who believed that women could achieve anything they wanted, though I'm certain she would have bristled at the label.

A small facebook tribute I paid elicited a response from a classmate. She reminded me that in 2013 we will be celebrating our fortieth class reunion and plans are already being whispered. I have never been able to attend past events - have never really missed them - but suddenly I wanted to go.

Excitement thrilled. I phoned the one friend from that phase of my life with whom I have stayed in touch over the years and who still lives out west. Three hours of conversation ensued, a small part of which was spent planning for this fantasy trip next year.

As I thought about the many people I could visit in Vancouver, I realized they all represent my early formative life, my springtime: childhood, high school, family and family friends, even university, all leading right up to the time I met and married Michael, embarking on my adult life.

My mind has been spinning with strategies for how to manage Michael's care for the week I'd like to be away. Of course I would fly, though I might need some serious pharmaceutical assistance for traveling by air on my own. I could not indulge in a slower means of transportation without robbing myself of valuable visiting time. Michael would have to go into a care facility for the time I'm away; I'm fairly certain not one single person would be willing to take on that task here at home. Would I put him in early, vainly hoping he might adjust while I'm still here to help out? Or would the swift bandaid-removal approach be best with no lead time? I have a full year to agonize about that, ample time to talk myself out of the entire project.

As I furiously researched hypothetical flights and accommodations, I realized that I'm seeing this as an endpoint to my current situation, and the joy I felt shamed me. But then perhaps that is a good strategy to give me the endurance I will need for the coming year; if I pretend that March 2013 is the end of my responsibilities, that I won't let myself think about life beyond that point, then maybe I can inject enough enthusiasm for the job to make it tolerable. I know in my heart I would probably return to a very seriously traumatized husband who would require an even greater effort to reset his equilibrium, but for now, I want this more than anything; I might be willing to risk it. I feel as though I am being given what could be the last opportunity to reconnect with all these people, to reset to my youth for just a few days.

Perhaps there is still some time to play, is what that happy little leaf seemed to sing. Vancouver, March 2013? Just maybe.