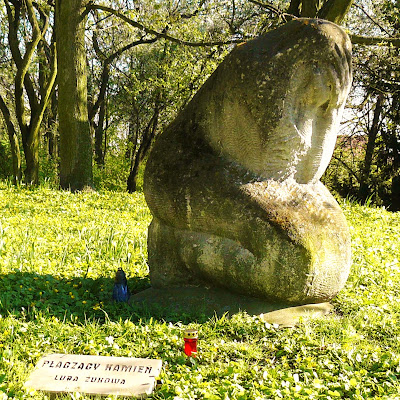 Every morning she looks down upon his sleeping face and wonders what the day will bring. Will calmness prevail? Will he develop some odd notion that must be relentlessly pursued without really knowing what it is, while she hovers over him trying to decipher the puzzle, trying to keep him from harm, trying to divert him if necessary? Will he exhibit a new and frightening symptom leaving her to guess whether medical assistance is required, whether to rush into action? Will the fact that she cannot waken him from a troubling slumber and erratic breathing mean something more than just another oddity of his disease?

These are concerns that sit upon her shoulders every moment of her day. There is little escape except for the few hours a week that she can leave him in the care of another. But even that means being tied to the cell phone just in case, being poised at all times to rush home.

She has hardened herself to the cruelty of the endless grief. The rare moments of clarity where he displays his old humour or an awareness of his reality can be a delight but always leave her scarred with another deep gash of sadness as she is reminded of the man she has lost. The grief ebbs and flows, now usually without tears, just a dull ache that grips the heart. To be otherwise would be impossible to bear and would render anyone incapable of functioning. The cleansing outpouring that accompanies a true death cannot be allowed to prevail. This death goes on and on and on. She has suffered the loss of her husband but cannot wear the widow's weeds.

The funeral of a friend's father summoned her. Because of her restrictions she could not attend the event but could at least pass by and express her condolences, hug this friend and and her family. She stood for a moment, hand on the casket, and uttered a brief prayer for the man whose life she hardly knew. It was a simple unspecific prayer, one to accompany him on his new journey. She felt dry-eyed.

As it happened, her own parents were buried nearby so she slipped away before the ceremony to pay them a brief visit before rushing back to her home of the living dead. Their grave was a mere pathway away, through a serene garden of lush plants. Gardeners mowed and trimmed away as she rushed past them. She felt a sudden urgency and nearly ran the few meters to the grave. The tears began and by the time she had reached the spot, the sobs were wracking her frame and forced her to her knees. The outpouring lasted only a few seconds.

She stood and walked slowly and now calmly back to her car, the ache relieved for the time being.


* Crying Stone, Luba Zukowa in Poznan, Park Cytadela.
Posted by Unknown at 7:01 AM