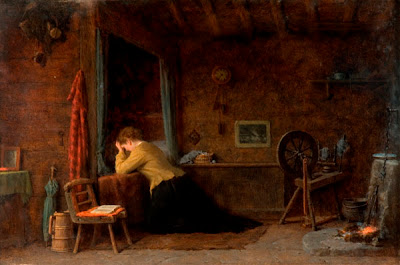 She leaned her forehead against his, "Michael, Michael, I have to call an ambulance. I don't know what else to do."

She had found him on the floor between the couch and the coffee table, stretched out on his belly. She wasn't alarmed. He spends a lot of time down there these days. He usually seemed to be absorbed in the intricate patterns on some of the carpets. Sometimes he just fell asleep. When she wrapped up her telephone conversation with her friend she went into the living room to check on him before preparing supper. She hadn't seen him go to the floor but only minutes before she could see his head doing its characteristic dyskinesic bobbing and swaying while he watched TV, and, clearly, from his position on the floor he hadn't fallen, merely slid down for a nap. Or so it seemed.

She called his name; his eyes were open but not moving. He didn't respond. Repeatedly she called to him. No response, not even an attempt to make eye contact. When she tried to help him up into a sitting position, he was a dead weight. He couldn't move and yet he was breathing normally.

She continued to call his name, ask him questions, urge him to move. Nothing. She shoved the couch and coffee table back so she could manoeuvre him somehow. Rolling him onto his back worked; then she was able to get his knees up and haul him into a semi-sitting position, allowing her to pivot him on his bottom so that his back was to the couch but too far away to be propped against it. With careful wedging of pillows to prevent him falling back to the floor, she rushed around behind the couch to shove it back into position where she could lean him safely.

Now that he was up, she had to assess his cognitive functioning. "Michael, what's my name? Are you in any pain? Can you look at me? Can you squeeze my hand?" His eyes were blank, unmoving. His mouth was flapping in an odd fish-like manner, open and shut, open and shut. No sound could he utter. No eye contact. No hand squeezing. She ran into his room to grab the blood pressure monitor. Normal.

Was this a Parkinson's crisis? She'd seen near catatonia before but rarely this severe. Usually it was provoked by a trauma like a hospital visit or a dental procedure, never just out of the blue like this.

She grabbed the portable phone to call her neighbour, a nurse. No answer. She tried the doctor's office knowing it was late and probably closed. No luck. Then her son called, just checking in as he often does on his way home from work in a distant city. Relief flooded through her as she told him of the predicament but she hung up nearly immediately to call the after-hours number for home-care patients. He calmly promised to call back in a few minutes.

The patient, unruffled nurse at the other end of the phone, hearing her tale, stated very clearly that she had to call an ambulance. "There's nothing anyone can do for your husband at home. He must go. Will you call 911 as soon as you hang up?"

Yes, she promised, dread gripping her heart. Here we go. She took a deep breath preparing herself for the catastrophe that was about to unfold. In his fragile state this could well be the end. A terrified final few hours in that hated hospital. Heavy narcotics to quell the mania. Uniformed guards to protect the staff from her crazed husband. Straitjackets. Agony.

One last effort to bring him round before she made that call from which there was no return, her head resting against his, "Michael, Michael, I have to call an ambulance. I don't know what else to do. I love you. Please come back now. Don't let it end this way. Please."

His leg moved. His eyes flickered.

"Michael, look at me." His eyes moved tentatively to focus on her face.

"Michael, what's my name?" He whispered her name.

"Can you grip my hand?" A slight squeeze.

"Are you in any pain?" An almost imperceptible shake of the head.

She sat back on her heels and heaved a heavy sigh. She knew the spell might not have passed fully and she had to be very vigilant. She helped him up onto the couch, got him settled comfortably, then curled up next to him, head on his shoulder. With every passing second he became more alert, his eyes darting around the room, his quirky Parkinson's facial contortions returning, his tongue doing that weird shooting out of his mouth like a lizard, all of it a joyously welcome sight.

When he was fully recovered a few minutes later, she asked him if he could explain what those frightening fifteen minutes (or was it longer?) had been about. He could offer no explanation, of course, but in his strange, garbled way, he said he could hear her through it all, that he had decided not to respond to her entreaties, and then he went on some ramble that made no sense at all.

It was music to her ears.

"A Prayer for those at Sea," Frederick Daniel Hardy, 1879