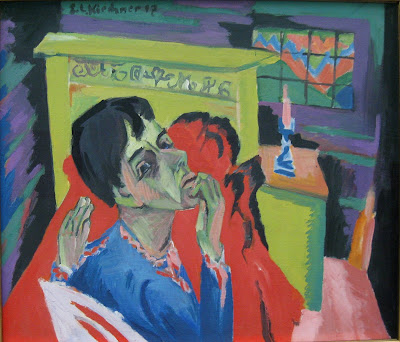 While I dream about my baby abandoned in the closet of a hotel that also happens to have a serious infestation of bedbugs, my husband clangs for my attention. It is 4 a.m. and he is anxious about a screaming baby he can hear. The next night I think that the cause of my interrupted sleep is simply another menopausal meltdown since I hear only faint rustlings from Michael through the monitor. Then a light goes on downstairs. I am instantly alert as I realize there is nobody else in the house. Just Michael, me and two sleeping dogs.

Life, during the past several weeks since my illness and return from hospital, has been relatively calm considering how turbulent it could have been in the wake of that emergency. But the deep waters of my husband's subconscious are not still; they are obviously roiling despite his lethargy and withdrawal into sleep most days. Recently he is often beset with that strange paradox of Parkinson's disease: when anxiety overwhelms, he becomes extremely mobile and competent even at this advanced stage of the disease.

There has been nearly daily anxiety over a trip he is convinced we must make or a meeting he must attend. Most days he collects all his toiletries in the bathroom and carries them to his room to pack. Twice I found his closet emptied out onto the floor while he sat overwhelmed by the task of preparing to travel somewhere. Vestiges of all those global business trips he used to make as a high level engineer for National Defence? Or is he fretting about my return to hospital on January 3 for the long-awaited gallbladder surgery, determined to go with me this time?

There have been increased visits to the basement to "fix" something, usually during his sometimes manic evening hours. I must follow him on these excursions because of the danger he can put himself into as he tinkers with sharp objects, not to mention the electrical panel that seems to draw his attention and concern. For some mysterious reason he must always approach all things electrical wielding a sharp metal object.

The temperature has dropped outside but that hasn't killed his drive to leave the house occasionally, all without warning and often without proper attire. He is still remarkably quick, adept and quiet when he is single-minded and determined.  I have been lulled into complacency the past year or so since these episodes had nearly stopped; I am having to sharpen my wits again.

I am truly awed by this man's continued physical prowess despite the ravages of this disease. He moves far less now and most days that movement is interrupted by louder, more violent falls. I, so inured to the thousands of falls he has taken over the years, find myself cringing now at their severity. Many people give me a questioning look when I report these falls, wondering why I don't try to prevent them and keep him immobile, protected. That would require forcible confinement, I'm afraid, and I would become his jailer. Initiating movement is still one of the few freedoms left to this man, and he remains miraculously uninjured apart from the growth of a few strange fibrous bulbs on his knees. I will reassess matters if and when he truly hurts himself. In the meantime I think I have done all I can to make his movement through the house as easy and unconstrained as possible with strategically placed grab bars, wide open spaces and familiarity.

But this morning's feat was stupendous. I was lying in bed, just awake, awash in hormonal sweat and not yet paying full attention to the rustling I could hear in Michael's room. At 6 am he is normally suffering from bradykinesia - the extreme slowness of movement associated with the "off" medication times - if not near-paralysis, his last dose of Parkinson's medication eleven hours earlier. The noises I was hearing surely were nothing more than the waking movements of a stiff body.

When the lights went on downstairs I was out of bed at lightning speed calling his name. I was stunned to find a robust and alert husband preparing to climb the stairs in search of me. Not only had he made it successfully out of his imprisoning hospital bed, he had climbed over the baby gate I use to keep the dogs confined at night in the hallway outside his bedroom. On top of that he was fully dressed!  Pants, socks, one slipper and a warm fleece jacket over his shirt. Even his sodden diaper had been carefully removed and neatly stuffed into the garbage pail by his bed. I was dumbfounded, awed, and mostly grateful that his instinct was to find me and not flee outside on this cold night.

My first comment was to express my admiration at his overwhelming accomplishment. Then I asked him if anything was wrong. "Anna's sick," he said, clearly troubled.

"No, I don't think so," my calm reply. Our eldest child, recently married and now pregnant (yes, we are to be grandparents in 2013!) has been very healthy so far, but I promised myself to contact her at a more reasonable hour since Michael had just managed to plant a seed of anxiety in my own brain. I asked him what he wanted to do. I couldn't deny him the pleasure of staying up if he wanted to after that remarkable accomplishment.  But he indicated he wanted to go back to bed. I had to steer him in that direction since he had forgotten where his room was. He was starting to crumple now that I had been roused and he had handed over the problem to me.

I too returned to the warmth of my bed but was unable to relax, listening intently for the reassuring sound of the heavy breathing of sleep to transmit through the monitor.

I write this now seated opposite him at the breakfast table. He is unable to concentrate on his oatmeal, spooning it over himself or into his tea more frequently than reaching his mouth. He is hallucinating, making strange noises and pulling contorted facial expressions, far worse than usual. The newspaper lies mangled around him, his glasses have fallen to the floor. He is glassy-eyed and clearly disconnected. He will most probably sleep through the rest of the morning, his countenance a dramatic shift from the agile, intelligent man I met on the stairs in the early hours.

I am bracing myself for the next chapter of my own minor illness and treatment. So inextricably linked are we that I know this next stage will be very difficult for him despite all the careful planning I am able to do in advance this time. It fills me with an anguish that I must hide from him but he will no doubt absorb in his uncanny way.