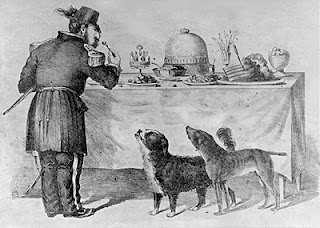 She sits at the table alone.  The call for dinner has been made but when he loses himself in a little project, there is little hope that her call will penetrate quickly. No matter. Mealtime is always spent in silence. She, having long ago given up attempting conversation, has her head buried in a book but more likely a puzzle, which can be abandoned quickly with less frustration than a book when she must inevitably jump up to attend to one of his many needs throughout the meal.

Minutes later, he emerges from the basement where he has been fiddling around on the workbench.  All dangerous tools have been removed. When she checked on him earlier and gave him the dinner call, he was lost in a mysterious task involving duct tape, his walking stick and a screw driver.  Best not to enquire, she has learned.

He falls hard at the top of the stairs. She masks a wince, never having gotten completely used to the many tumbles he takes every day.  Lately they have been harder, more severe, though, miraculously, he still never hurts himself.  His kneecaps are leathery, misshapen and thick. He lunges toward his wheel chair parked at the table. Thankfully, one of them had remembered to put the brakes on it earlier.

Seating him can be a problem some days. Tonight he has perched on the edge of the seat, only one cheek actually making contact. She urges him to adjust himself before he falls. He ignores her. She returns to her seat, long past worrying about the consequences.

His meal has cooled. It isn't one he particularly cares for, she knows that, so he probably won't eat. She wonders bitterly why she bothers. He smothers his potatoes, tofu cutlets and carrots in heavy dark HP Sauce that he has mistaken for gravy. If it hadn't already been a foregone conclusion, he most certainly won't eat everything now.  Only fit for the dogs, she sighs resignedly.

She finishes her meal only minutes after he has joined her at the table. She might as well begin cleanup because she cannot leave the room. Lately his needs have escalated. This being his most mobile and distracted time of the day, he frequently jumps up and stumbles toward the kitchen in search of something. He can never find it, nor can he articulate his wishes.  She must guess and not show her frustration. He stumbles back to his seat, fiddles around a bit more with his food then leaves the table for the living room, his meal barely touched. After several falls, he settles on the couch. He grabs the ever-mysterious remote control and makes a few wild stabs at the buttons, peering at it as though he has never seen such a thing.  She glances at the clock, sees that it is time for Jeopardy, then rescues him from Remote Control Purgatory. He possessively snatches the gizmo from her and resumes his study of the buttons. She knows she will be back in moments to help him out again.

She returns to the kitchen to scrape away his meal and finish cleanup.

The dogs are happy at least.