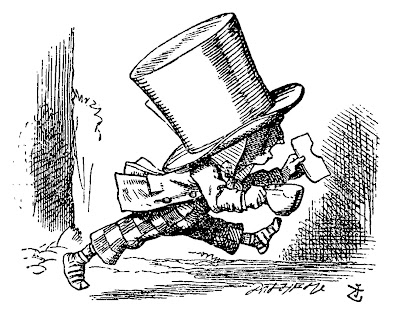 Her irritability was so high, it had to be channeled. Bedtime, when she's tired or bored, can seem like an eternity. Snack, medication, bathroom, teeth: all simple processes under normal circumstances but sometimes, with an advanced case of caregiver irritation, can take forever.

Earlier he had shown some impatience with her usual style of administering medications. Now tired of constantly having to cue him (Put the pills in your hand; put them in your mouth - no, not in the water; now have a drink) she simply tips the egg cup of pills into his mouth then shoves in the straws of his cup, whereupon he automatically takes a sip. In a rare display of independence he had petulantly insisted on taking the seven p.m. dose of medication himself, spilling pills and water in the process. Right, she thought sharply at bedtime, tonight I will let you do all of it yourself.

She plunked his bedtime snack, two yogurt cups, onto the table in front of him, careful to push the day's last dose of meds out of his reach to avoid confusion. She left him to peel off the foil wrappers and feed himself, then, standing close by in case of calamity, she let him try to figure out the medications on his own. Removing the wrappers was complicated, medications even more so. He sat and stared at them blankly, then looked up at her imploringly for a cue. But she was feeling uncharitable and turned away, leaving him to sort it out. After a few moments, he lost concentration and started scribbling busily on the newspaper. When several minutes had elapsed and the pills were obviously not going to move without intervention, she finally took his hand and coached him. Annoyance had to be swallowed.

Then came the visit to the bathroom for nightly ablutions. After helping him onto the toilet, a very necessary step if she wants to avoid a mess, she left him alone. By now her impatience to have the day end was reaching a fever pitch. On poking her head into the bathroom she saw that he was inspecting his teeth. She gave a gentle prod (in her own head a scream) of encouragement to speed things up but he seemed determined to slow things down. She knows he is probably not capable of deliberate behaviour anymore, but tonight felt like an exception. She knew, however, that her impatience was simply out of control.

She started to pace, nervous energy now nearly boiling over. She found herself humming a tune, then realized with a laugh that it was a children's song she used to sing with the kids when she wanted to joke with them about feeling crazy: "I am slowly going crazy. One, two, three, four, five, six, switch. Crazy going slowly am I. Six, five, four, three, two, one, switch." Repeat, repeat, repeat, repeat.

Faster and faster she paced around the large dining room carpet, then expanding the route around the stairs, speeding up the song until she was nearly running and shouting. If anyone were to see her now...

Finally he emerged from the bathroom. Whether he had actually accomplished anything she didn't care.  Hasty prayers and goodnights once he was settled into bed, then she nearly flew upstairs to her room.