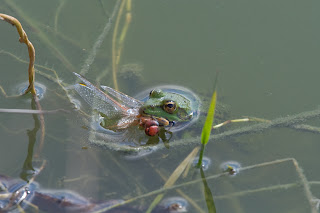 Facebook has become my friend, virtually linking me, often in real time, to my true flesh-and-blood friends. I check it frequently for updates on people's lives. I enjoy their news and the many links they provide; some educate, most simply entertain. I often laugh at silly videos or I am moved to tears, over a beautiful musical contribution, or contemplation over a thought-provoking news clip. It is sometimes this shut-in's only connection to the outside world.

Recently a friend shared a short video that tickled my fancy. Entitled "How to Piss off a Frog", it showed the hand of a young woman holding an iphone in front of a large frog. On the screen of this device were many virtual flies moving about. The frog could obviously see these creatures because he tried repeatedly to zap them with his tongue, unsuccessfully, of course. What made the video so funny was at the very end when the cruel human in this story reached out her finger, only to have it nastily attacked by the annoyed frog. Poetic justice.

Facebook allows me to "share" these little tidbits on my own page, which really amounts to a virtual bulletin board for all of my friends to see. Whenever there is an interaction with someone, I am helpfully notified on my email account, just in case I hadn't bothered to check in on Facebook that day. A foolproof system so you never miss a message.

Wednesday was a day like any other; my email account announced several interactions.  One stood out and startled me.  I hadn't heard anything from this friend in well over a year. According to the announcement, he had apparently shared my frog video. This struck me as very strange so I decided to do some sleuthing. There was no record of this video on his own Facebook page as there should have been if he had actually shared it. There was also no record of the encounter on my own page, as there always is.  I double-checked the email address to be certain because my heart was racing now with a mystery. Yes, it was the Facebook notification address, the same that always appears with every announcement. Even though I know my friend would have enjoyed this silly little joke, it could only be some kind of cruel joke or some technological glitch in the system. That must be it, I reasoned with myself, even though I wanted to think that somehow this friend had seen my humorous little contribution and had had a good laugh.

But, you see, that can't be possible.  Milan has been dead for over a year. Facebook in heaven? Icloud?I'd like to think so even though I know the more mundane, prosaic explanation is probably the correct one. My shock worn off, I've been smiling ever since and refuse to erase the evidence of his "activity" from my email. A whole new dimension to my circumscribed life. I should connect with Mark Zuckerberg, Mr. Facebook himself; I wonder if he knows.

*"Have a Good Lunch" by Domenico Salvagnin
Posted by Unknown at 6:57 PM