Of Navies and Armies 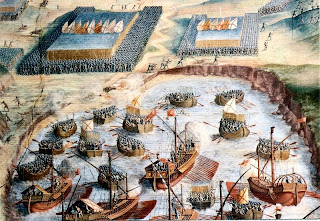 "Navy," he said, then a long pause. It was one of his only really coherent words of the day, few of them ever strung together into a meaningful sentence.

"Army," then a long thoughtful gaze out the window. The newspaper was spread before him so I peered over to see if there were any clues in the headlines. Maybe the recent cruise ship disaster in the Mediterranean. No. Nothing.

Michael worked as an engineer for Canada's Department of National Defence for most of his career, so topics about the armed forces often came up in our conversations. He has a strong reverence for our men and women in uniform and, until recently, never missed a November 11th Remembrance Day service in all our years together. He had never had any desire to be a military man himself, perhaps after the years of wandering from post to post with his dad in the Canadian airforce. He said once that he had craved stability as a child so, when the family finally settled in the Ottawa area more than four decades ago, Michael had no desire to go elsewhere. Deep roots were made.

I listened quietly, not making any attempt to prompt him or question what he was trying to say. I remained uncharacteristically silent.

"More seamen," he added minutes later, continuing his pensive and somewhat sad stare out into the snowy front yard. He seemed far away but his eyes looked intelligent, not dazed and glazed as they often are. Clearly he had something important on his mind.

If only he could express what is locked away inside. I haven't had a real conversation with my husband in a very long time, years, in fact. I miss him.